The Gazebo Garden is situated in the residential and commercial area of St Faith’s in the centre of Havant, between East Street and The Pallant. Access is from The Pallant at the southern end of a car park next to St Faith’s Hall. It is a garden folly forming one side of a small walled garden. There are two entrances, one through the gazebo via iron gates and the other in the south east corner.

Steps with new railings to first floor of the gazebo

The Gazebo itself was built in the late 18th century – 1779 is stamped on the weather vane – by William Lellyet, whose house was then sited where the present numbers 23 & 24 East Street stand. It would have then looked out over the Manor House and its grounds and the Fairfield to open country. At some point it became separated from the main house and by 1982 was on the point of collapse. In 1982 The Bosmere Hundred Society organised the renovation of the roof and walls of the Gazebo with money donated by Havant residents and businesses, supplemented with grants from The Borough Council, Hampshire County Council & The Monuments Trust. In 1992 The Borough Council completed the repairs and created the garden.

At present (2017) Havant Civic Society had taken over the responsibility for the Gazebo Garden, have applied for and been granted lottery funding of £19,000 and work is currently proceeding. This includes the repointing of brickwork, new railings for the external steps, an existing window being replaced and the three blocked windows on the first floor to be re-instated. New planting has been done by Spring Arts & Heritage Centre who has also put up illustrated boards showing the planting plans based on the 18th century designs. There are still three magnolia trees, each in a corner of the walled space the beds remain the same with newer and different planting. Four distinct beds around the central circular bed are filled at present with tarmac. 24 metal folding chairs are hung under the Gazebo for public use. It is a wonderfully peaceful unexpected oasis in the middle of an urban landscape. 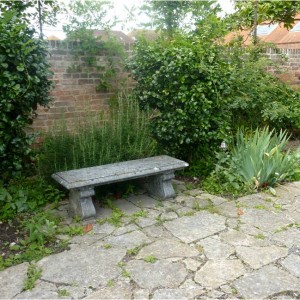 The late 18th century gazebo was originally part of a townhouse garden, and is now separated from the house. It was rescued from collapse in 1982 and in 1992 a small public garden was created. At present (2017) further restoration works and improvements are being carried out to the structures and the garden. 24 folding chairs for public use have been added. It occupies the edge of a car park in Havant town centre providing historical interest as well as being a haven of peace and beauty in a bustling small town. That area of the town would suffer a loss of quality if it were to disappear.
HGT Research: January 2001, updated August 2017