Stanley Park is situated between Western Way, Gomer Lane and Stokes Bay Road. The soil is loam with sub-soil clay. Having once been part of a 19th century parkland the location dictates the design of the park. There are few views out, due to the mature trees on the site. 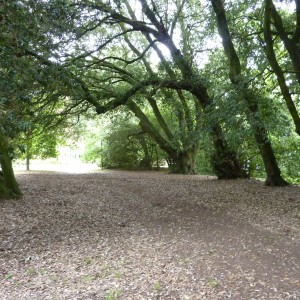 1838/39 Alexander Baring, First Lord Ashburton bought 56 acres of Ordnance land at Stokes Bay on which to build a summer residence designed by Decimus Burton, with direct access to the beach. His good friend the British Statesman, John Wilson Croker, was encouraged to purchase a smaller plot of land adjacent to his for himself. His house, originally Alver House and later Alverbank, is shown with Bay House on the Tithe map of 1840. Times-online, 01/01/1840 notes: ‘Lord Ashburton and John Croker have recently purchased small plots of ground of the Ordnance Board fronting the sea in Stokes Bay and both these distinguished characters are about to build marine residences thereon.’ It is believed that Sir Joseph Paxton, a friend of Ashburton, influenced the design of the parkland of Ashburton House (later Bay House), in particular the Pinetum (woodland area), many of whose trees are still to be seen. Lord Ashburton died in 1848.

The much smaller grounds of Alver House consisted of a large garden stretching down to the sea, land to the north of the house and a walled kitchen garden. John Croker died in 1857.

Deeds show that Bay House was owned by the War Department in 1859 and The Times in 1862 reported that the Admiralty ‘…are about to take a lease on Lord Ashburton’s mansion and grounds……the lawn extends to within 50 yds of the shores of high-water mark. The approach to the house is by a handsome drive with Gothic Lodges and entrance gates.’ It would seem that the Admiralty changed its mind as the house was offered for sale in 1862;the Times and London Illustrated News in 1862 described it as having a large garden with a ten-acre field adjacent to the lawn and 40 acres of land immediately surround the house. A photograph shows unruly trees and shrubs in proximity to the house. Dr Burney of Burney’s Naval College appears to have lived at Bay House from 1870 and bought it in 1878. Described as being planted with numerous sub-tropical and other trees and having 23 acres, Burney’s daughter put it up for sale in 1891. It was bought by Francis-Sloane Stanley in 1892 and became a family residence.

An OS map, dated 1856, shows lawns immediately round the house with woodland surrounding the lawns on all sides, except to the north east where there is a walled garden; the designed woodland (now part of Stanley Park) lies to the East of Bay House adjoining land belonging to Alver House. The 2nd ed OS map, 1898, shows the pathways and dense wooded areas. The 4th ed, OS map, 1931, shows little change.

In 1902, the house and grounds passed to Colonel R Sloane-Stanley, who is likely to have maintained the gardens well; the Pet Cemetery still to be seen in the woodland of Stanley Park, is attributed to him. He remained in the house until 1943 when he sold the house and 28 acres of land to Gosport Borough Council, at the same time donating 17 acres of parkland which included a fishpond, woodland and lawn, to the people of Gosport. The house and five acres was intended for a school, the rest of the estate to be re-sold for Stokes Bay development. In 1944, Bay House was requisitioned and became part of the D-Day preparations and the temporary home of the Royal Engineers. Many of the quarter million Allied troops sheltered in the woodlands of the estate, before setting off to Normandy. When derequisitioned in 1946, Gosport Council proposed naming the 17 acres of grounds it had been given for the people of Gosport, ‘Stanley Park’. In 1947, the Council decided to buy 7 ½ acres to the north of Alverbank House, which included its walled garden to join into Stanley Park, next to the woodland area.

On 29 March, 1947 Colonel Sloane-Stanley was invited to name the park ‘Stanley Park’ which was duly opened by Major A R Nobes. 1949 saw the gift of eight seats for the park, from the estate of the late Colonel Sloane-Stanley. In 1951, a partial layout of Stanley Park was undertaken at the Western Way entrance. Bay House, meanwhile became a Gosport County School in 1949.

In 1954, Bay House with 5 ¾ acres surrounding it, was transferred to Hampshire County Council, and 7.8 acres of the Stanley Park were also sold to it to enlarge Gosport Grammar School by now at Bay House. A new boundary fence was created to the east of the house and west of the present Stanley Park woodland.

In 1963 the area in Stanley Park sloping down from Western Way entrance, became ‘The Dell’; all this area was designed by the then Parks Superintendant, Mr Worthington. Towards the end of the 1960s, the next Superintendant, Mr Brown, redesigned the walled garden (from Alver House) with a long rill-like pool and planted borders. It was named Osborn Gardens, in honour of Alderman Charles Barnard Osborn who had overseen the provision of flower beds at roadsides and street corners in Gosport. A description of the Park in 1997, prepared for Hampshire County Council’s Urban Parks Study by Hampshire Gardens Trust describes it at that time as: 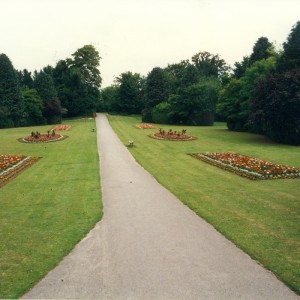 ‘Formal parkland area, landscaped and laid out with beds of flowers, areas of shrubs and clumps of trees. The formal parkland area was developed from the wild area of ground of the original estate. The woodland area appears to have changed little, and has many fine mature trees although many of the best of these were destroyed in the 1987 storm. Some were also destroyed when land was transferred to Hampshire County Council, although some new trees were planted along the new boundaries. The grove where azaleas and rhododendrons grow is attractive but according to some not as flourishing as in the past. The paths and pathways in the woods appear not to be as clearly defined as in the past. The pond in Osborn Gardens is empty and damaged. Tree roots are coming up through the base. A pets cemetery dating to the time of the Sloane-Stanley family lies in the woodland; there are a number of mature trees – redwood, sweet chestnut, cedars, yew, Scots Pine, Acuparia, Holm oaks and others. The park is described as a beautiful and secluded area carefully hidden from the road along Stokes Bay. Apart from the Osborn Garden, the Park is very well kept.’(Visit by HGT 1996). 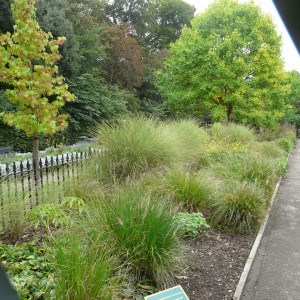 The park is well-used by both residents and tourists. Apart from the woodland, the park is adequately maintained by outside contractors who appear to re-plant and weed when necessary. The layout is little changed from the late 1960s when most of the work in creating a public park from a private estate had been carried out.
Entrance from Gomer road goes along the boundary of Bay House Academy, a boundary that in places has an ugly metal and concrete fence. The route leads past the woodland whose pathways have become very overgrown and fallen trees and unrestrained shrubberies impede passage. It is understood that there may be plans to re-instate some of the woodland and its paths; the pets cemetery can still be seen.

When arriving at Alverbank Hotel, on the right, and the Osborn Gardens on the left it is a little confusing to see where the park ends, however on entering Osborn Gardens, the peace and tranquillity of Stanley Park is revealed. The Osborn Gardens have changed since 1996; the ‘ponds’ have been replaced by planted beds. The right-hand wall (part of the original Alver House walled garden) fell down recently when ivy was being taken off and was unfortunately, not restored. There is now a low brick wall topped with railings and the feel of an old walled garden is diminished. The bed outside this new boundary is well-planted with hellebores, geraniums and grasses.

The exit from Osborn Gardens leads to the Dell, which is still a sweeping, lawned area though it would appear some picnic features have disappeared since 1996. The colourful, herbaceous border planting from the 1960s persists; the area which constituted the 7 ½ acres acquired from Alver House has some old and newly planted trees, making a pleasant, estate-like walk from the Western Way entrance down through to Alverbank Hotel. There are no longer any toilet facilities in the park (extant at the time of the HGT visit of 1996, although reported as being in very poor condition). There are good descriptive notice-boards at the Western Way entrance and Osborn Gardens; the park is locked from sunset to dawn each day.