Princes Gardens is a small, informal town centre garden bounded by the main road, Wellington Avenue to the north and the minor roads of Princes Way to the west and High Street to the south. To the east of the site is a doctor’s surgery and further to the east beyond the surgery is a car park. The gardens are mainly grass, shrubs and trees with some maintained flower beds. There are many commemorative trees, a bandstand and horse sculpture.

Princes Gardens was created by Aldershot Borough Council on land that formed part of the first military camp in Aldershot and is recognised as the gateway between the military and civilian towns of Aldershot. The camp, erected in 1854, was known as the Royal Engineers Yard and provided accommodation to engineers who surveyed and made the preliminary arrangements for The Camp at Aldershot. Aldershot Borough Council bought the whole site in 1930 from the War Department and developed Princes Gardens and a car park on the upper section.
At the time of the 1997 survey the Gardens had recently been refurbished.
A major feature of the Gardens is a sculpture of a charging horse on a section of a Bailey Bridge by Jill Tweed which symbolises the link between the town of Aldershot and the Royal Engineers and cavalry regiments. The sculpture was unveiled in 1994 as part of an Older Urban Area Regeneration scheme.
A more recent feature is the Princes Gardens community bandstand which was built to celebrate the Queen’s Diamond Jubilee in 2012. The design was chosen by local people and the bandstand was officially opened on Saturday 2 June 2012 at the town’s Victoria Day jubilee celebrations. The bandstand hosts a variety of events and concerts for the community including brass band concerts, live outdoor theatre and the Aldershot Live Music Day. The bandstand can be booked by community groups for free.
Also in the Gardens is a refurbished cast iron wheel on a blue pearl granite plinth, erected in February 2006 to celebrate the 100th anniversary of the Rotary movement.

In 2010 the Princes Gardens Surgery was built where there was previously a Citizens Advice Bureau (1997 survey) and Princes Gardens features in a novel Maralinga by Judy Nunn.

Over the years many commemorative trees have been planted, and survive, in the Gardens, including:

The gardens are mainly lawned with an avenue of mature horse chestnut trees to the south and other trees towards the north west corner. Along the western border are beds of shrubs with planted wooden containers placed externally along the pavement of Princes Way. There are fewer maintained flower beds than the 1997 survey but there is a large, wooden post lined semi-circular raised bed in the lawn towards the north west corner, a smaller bed also towards the north west corner and a bed along the boundary from the north west entrance along the Wellington Avenue. This bed used to extend along the whole northern boundary but now gives way to shrubs and small trees after a few metres. There is a further teardrop shaped flower bed between the horse sculpture and the doctors surgery building. The flower beds are well maintained and contain seasonal planting.
The Charlie Chaplin tree has survived being vandalised (1997 survey) and moved (according to gardeners on site) and is currently a good shape and size. All the other structures and commemorative trees are surviving in good condition.
At some stage an ornamental fountain has been removed leaving only a plaque on the ground in the shrubbery near the horse sculpture.
There is a decorative metal bench to the West of the gardens which is in good condition but with no plaque (not in 1997 survey).

The area is well-used by local people. It is close to the shopping centre, although many of the shops along the High Street boundary are currently closed. The doctors surgery is within the Gardens and the bandstand is a venue for public events including local celebrations and public concerts. The Gardens are very attractive and well maintained with no vandalism evident and very little litter.
HGT Research: UPS 1997, update March 2018 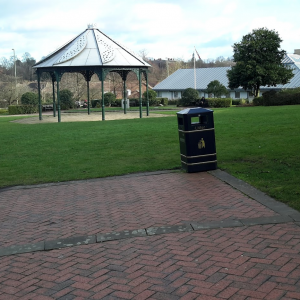