Originally a wetland meadow known as Street Mead, lying between two arms of the river Test in Romsey and owned by the former Romsey Borough Council.

After the First World War, money was collected for a memorial which was used to provide a public park. Opened in 1920 the park was created on wetlands of a two hectare (five acre) meadow: hard core to shore up the wetland was transported from a redundant site of a ‘horse reform’ ground, where some 4000 horses had been re-trained after military use during and after the war. A War Memorial was presented in 1921 and in the inter- war years a bandstand with a thatched roof was installed. The War Memorial stands on an axis between the two arms of the river with the bandstand on the same axis. The bandstand later fell into disrepair and was removed. In June 1946, Lord Mountbatten donated the Japanese 150mm field gun which had been given to him as Supreme Allied Commander of the South-East Asia command when he received the surrender of the Japanese. 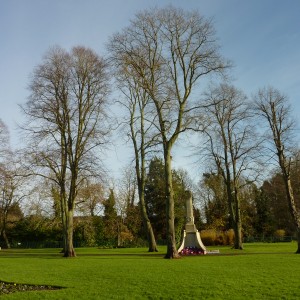 The Park remains much as it appeared in the 1920s with a simple layout of grassed areas and planted beds. The bandstand was restored in 2002 based on Victorian castings and without the thatch. Lying between a fast flowing arm of the Test from the Mill race and a calmer arm, the park’s situation is very picturesque and provides an oasis of quiet.

Opened in 1920 and created on a two hectare (five acre) meadow with money collected for a First World War memorial, between two arms of the Test, the Park comprises grassed areas and flower beds, a War Memorial (1921) and a restored Bandstand (2002). In July 2015, a sculpture of a war horse, designed by Amy Goodman, was unveiled by Princess Anne – click here for more information.