An attractive public park situated to the South of the M27, on rising ground in West End to the NE of the village centre and accessed via its main entrance on High Street. There are far-reaching views from the undulating parkland alongside woodland and ancient wet meadows. There is an ancient boundary bank with oaks, probably a tithe boundary with an open ride alongside, thought to be a drovers’ road.

Hatch Grange was recorded as the home of John de Hache in 1320, in an area of open fields. The Tithe map of 1845 shows Hatch Farm and by 1863 there were two farms, Hatch and Grange Farms which had been purchased by the Caleb Gater family of Gater Mill, who created the Hatch Grange Estate of 300 acres. A house was built in 1863 on the site of Grange Farm, originally intended to be the dower house for the family but the Gaters never lived there. In 1872, it was acquired on his behalf (and in his youth) for R Warneford Fletcher. Warneford Fletcher took up residence in 1874, planted an avenue of limes and being a keen gardener imported rare specimens from abroad and created the gardens, including a delightful rockery. The house was approached through a ‘flourishing row of limes’ concealed behind by ornamental woodland. In 1897, the Jubilee Clump, a circle of conifers, was planted to celebrate Queen Victoria’s Diamond Jubilee. On the death of Warneford Fletcher in 1928, the estate was sold. Hatch Farm to the North was bought by developers. The Sales Details for Hatch Grange describe a reduced 35 acres with a carriage drive through an avenue of lime trees, charming gardens and grounds, four cottages, woodland and grassland. The gardens are described as having lawns, rose-beds, clumps of rhododendrons, herbaceous boarders, rock garden and walled kitchen garden. The Parkland was well-planted with a variety of timber and ornamental trees and flowering shrubs, shady walks and belts of woodland. It was bought by Commander A Thurlow and Basil Underwood, a builder. In the late 1930s the house was destroyed by fire.

In 1938, 30 acres of Hatch Grange were purchased by West End Parish Council. A Grove was planted in 1983 by ‘Men of Trees’ (later to become the International Tree Foundation), as a memorial to its founder, Dr Richard Barbe Baker who was born and brought up in West End. For the next 20 years the site was enjoyed by the residents of West End and more trees were planted. In 1988, a beacon was erected on the high point to celebrate the anniversary of the sighting of the Armada. In the same year, Wimpey/Bovis created a dilemma for the Parish Council as they wanted to purchase five acres of the ancient wet meadows to add to the housing to the North and West of the Recreation Ground but the Parish Council voted not to sell.

View of beacon, the Jubilee Clump and the lime avenue in the background. 2019

The Friends of Hatch Grange was formed in 1989 and a joint venture was set up to provide environmental improvements with Itchen Hamble Countryside Project and West End Parish Council. Cattle were introduced to graze the meadows and there has been much tree and hedge planting over the years. Small pieces of land have also been added. A former farm pond has been replaced by a stream and new pond. Boardwalks, kissing-gates, stiles, a farm gate and hoggin pathways were introduced.

Hatch Grange remains a delightful oasis of undulating land and parkland trees, with the imposing avenue of lime trees which would have led to the big house. The high ground is still topped by the circle of conifers planted for Queen Victoria’s Diamond Jubilee, with the beacon erected in 1988, sited close by. The views from this position are notable and it is said you can see over to St Catherine’s Hill, near Winchester. This part of the site also looks down on the imposing lime avenue. For ramblers, there is an excellent network of paths through and round the 30 acres.

Parkland and grounds from a mid-Victorian house which had impressive gardens. Now a recreation ground of undulating land with extensive views, an old lime avenue, a circle of Victorian conifers and a beacon erected in 1988.
The significance of the site lies in its commanding position, its designed open space and historic features such as ancient wet meadows, a lime avenue and a circle of conifers planted for the Diamond Jubilee of Queen Victoria.
HGT Research: c2000, updates 2015, 2019 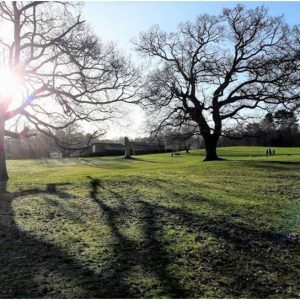 View of parkland landscape with library at entrance. 2019