Eastrop Park is located south east of the town centre on the River Loddon, which is a tributary of the River Thames. It is fed by springs that come from the upper chalk aquifer, rising within the urban area of Basingstoke at West Ham Farm. In its first mile the river flows eastward, through Glebe Park, under the Festival Place shopping centre, through Eastrop Park, and from there flows north east to meet the Thames.

In AD 945 King Edmund the Elder gave the Eastrop water meadows of the River Lodden to Alfred of Marlborough who built a manor house, a chapel and a farm in the east fields. By the time of the Domesday Survey it was recorded that the manor of Eastrop was held by Carle of Edward the Confessor, and belonged to Alvred de Merleberge in 1086.
By 1167, the manor was in the hands of the Brayboef family at least until 1223 when Henry de Brayboef obtained a licence to enclose his woods at Hackwood. The tomb of William de Brayboeuf, Lord of the manor of Eastrop who died in 1294, is the oldest monument in the Holy Ghost chapel at South View Cemetery.
In 1306 Humphrey de Bohun Earl of Hereford and Essex is named as as guardian of the lands and heir to the lord of the manor, and held by his descendents until early in the 16th century. In 1536 Eastrop Chapel was disendowed in 1536 and transformed into a woollen mill by John Lesse. Two other mills operated within the area one one of which was a silk mill. In 1662 Richard Whitehead was recorded as Lord of the Manor, but by the end of the century the Manor passed to the Searle family until 1805 when all manorial rights in Eastrop apparently ceased, possibly arising from the construction of the Basingstoke Canal which was completed in 1794.
Basingstoke Canal Navigation Company is recorded in the Tithe awards and Lord Bolton identified as landowner of the 6 acres rented to Edmund Portsmouth – miller. The mill is identified on Taylor’s map of 1759, and named on Greenwood’s map of 1826. Starting at the wharf in Basingstoke the canal ran to the south of Eastrop meadows to join the Wey Navigation at Byfleet. However, during the early 19th century, improved roads and the completion of London to Southampton railway in 1846 caused serious decline in the use of the canal, which lingered on, until 1914, when traffic between Woking and Basingstoke ceased. In 1920, the roof of the Greywell Tunnel collapsed and eventually the canal became derelict, and was filled in during the 1930’s remaining closed as far as Up Nately near Hook.
In 1961 a New Town Development strategy for Basingstoke was the driving force in the expansion of the town, and Eastrop Park, developed as recreation space for the expanding population was opened 1972. Relics of the ancient boundary hedge, which used to run along the canal, now runs along the southern edge of the park, and the modern boating lake is on the same spot as the mill pond shown on Taylor’s map of 1759 – later called Penton’s Mill. 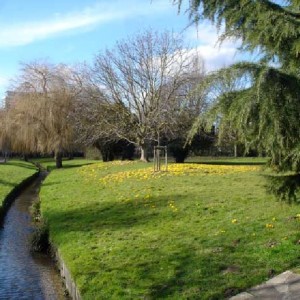 Eastrop Park today is one of Basingstoke’s premier parks, providing leisure facilities including: r Boating Lake, Model Boat Lake; Paddling Pool; Children’s Play Area; Climbing Web; Boathouse Café; Toilets; Crazy Golf; Trim Trail; Tree Trail and Performance Canopy. A pedestrian and cycle route links the town centre with the park at its western entrance. Design features incorporated reflect the long history of the water meadows by the formal use of the river as it flows through the site.
Some modern stream alignments reflect the original water management arrangements. These water meadows would have been richly endowed with the Leucojum aestivum – Summer Snowflake or the Loddon Lily taking its name from the River Loddon, reputedly where this plant was first found and categorised (pre Linnaeus).

Built in the water meadows of the River Lodden during the 1970s Eastrop Park is now one of Basingstoke’s premier parks. The historical markers present include the name Eastrop deriving from the Saxon name ‘eastern settlement’; the water management arrangements present, including the lakes and streams through the park reflecting original management of the Loddon water meadows; and the development of the Basingstoke Canal built in the late 18th century, and now defined by the relic hedge-line along the southern boundary of the park.
Significance: Important public park within the Basingstoke & Dean Borough Council area, arising from its location in the Loddon valley and connection with the history of the Basingstoke Canal. Loddon Lily is a British Red Book (vascular plants) listed species and is also a listed species in the “Biodiversity Action Plan for Hampshire”.
Landscape Planning Status: One of the Borough’s public parks, managed by the Basingstoke’s Borough Council.
Research: EM Consultants, June 2010

Click here to visit Basingstoke site for this location.